What is an Adjective? 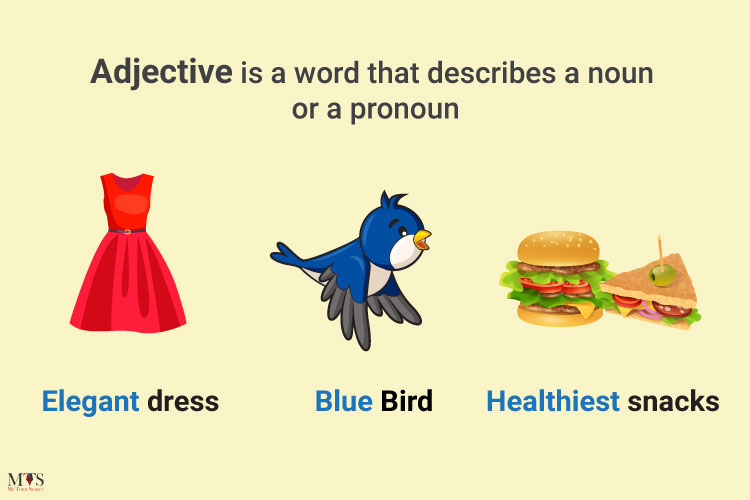 Table Of Content
Definition:
Types of Adjectives
Difference between Adjective and Determiner:
Conclusion:

If you are new to learning the English Language and Grammar basics, you have come to the right place. Have you been wondering what an adjective is? How to use it properly in a sentence? What are the different types of adjectives?

In this article, you will learn all there is to know about “Adjectives.”

Adjectives are used to describe the qualities of nouns or noun phrases. They are further divided into thirteen different types.

Adjectives were considered one of the most important parts of speech in the English language. Originally, they were classified with nouns. However, a few words initially classified as adjectives have now been renamed as determiners, including words like a, the, this, and them, etc.

The Merriam-webster dictionary has defined adjectives as:

“A word that describes a noun or a pronoun”

“A word belonging to one of the major form classes in any of numerous languages and typically serving as a modifier of a noun to denote a quality of the thing named, to indicate its quantity or extent, or to specify a thing as distinct from something else.”

Blue Bird, Beautiful Poem, and Strong Morals, here Blue, Beautiful, and Strong are the “adjectives” in each, and they can be seen enhancing the meaning of nouns followed by them, i.e., Bird, Poem, and Morals.

Here’s a list of 10 words that can be used as adjectives:

Examples of Adjective in Sentences:

To further clarify what adjectives are, let us go through a few sentences consisting of adjectives:

All the words in bold are “adjectives” as they modify the quality of the nouns in the sentences.

This dress is prettier than the other one.

She is much quieter as compared to her sister.

Healthier, prettier, and quieter are comparative adjectives in these sentences.

Besides these, a few irregular comparative adjectives include better, worse, elder, and further. 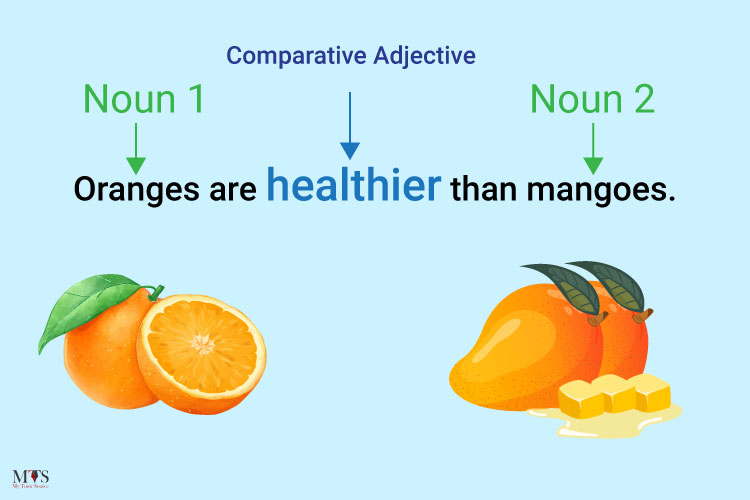 When something is of the highest degree/quality compared to the other, we use the superlative form of adjectives.

He has the highest grades in the class.

Bananas are one of the healthiest snacks.

Adam just told me the saddest piece of news ever!

Lee is the most genuine person in our friend circle. 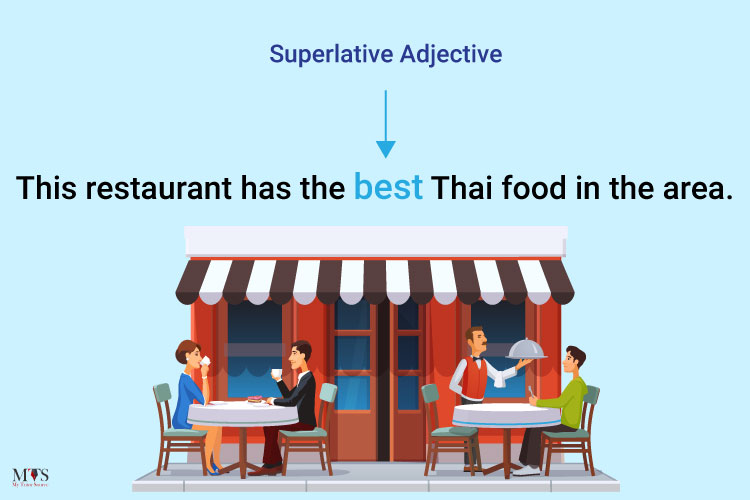 The adjectives that don’t come right before the noun/noun phrase, but at the end of the sentence, joined to the noun with a linking verb, are called predicate adjectives.

My landlord is rich and frivolous.

The sun was shining bright. 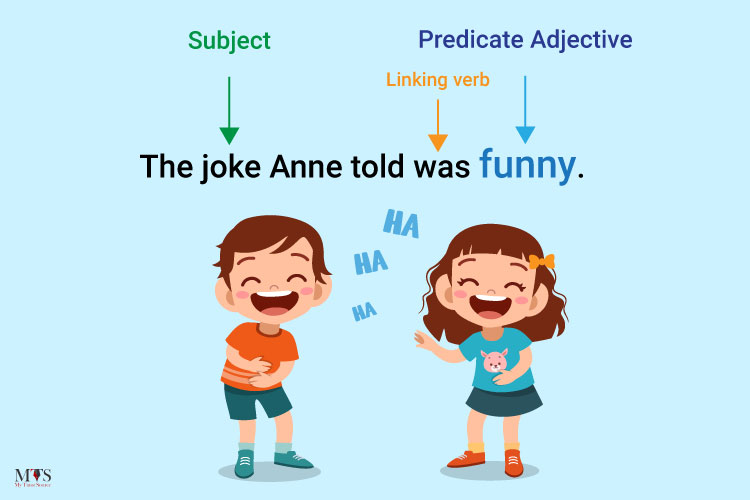 Adjectives consisting of multiple words joined together by a hyphen (or not) are called compound adjectives, like well-written, happy-go-lucky, world-famous, etc.

Remember that compound adjectives will always be placed right before the word they will be modifying.

Britney has such a happy-go-lucky personality.

She presented a well-researched idea.

They can also be written without hyphens, but you will need to put inverted commas around them. 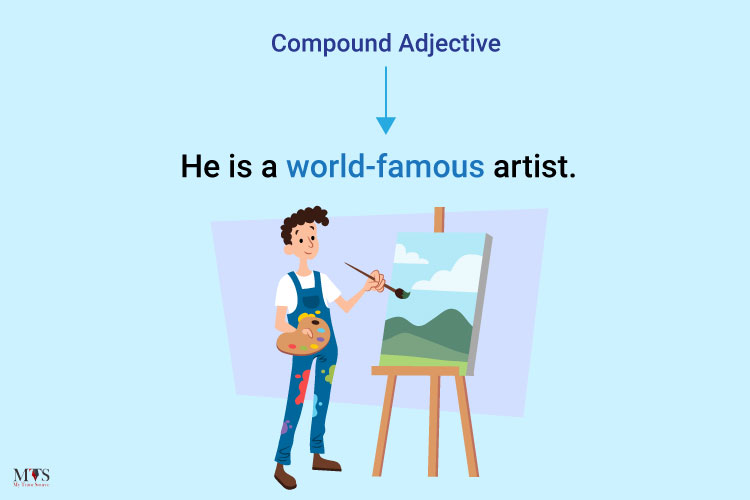 Nobody liked Sheldon and his “holier than thou” attitude.

Or proper nouns can also at times be used as compound adjectives, but then the first words are always capitalized for each word.

This movie had such a Breakfast Club feel.

As evident by the name, adjectives used to show possession, ownership, or belonging are known as possessive adjectives. They usually are words like; mine, his, her, our, their, etc., and correspond to pronouns like Me, I, He, She, Them, etc.

Ally narrated her poem to the audience.

This family business is their legacy.

Welcome to our house. 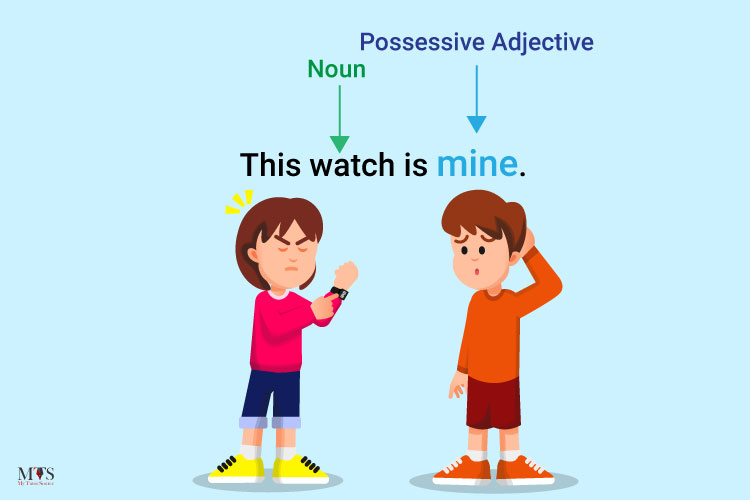 The adjectives that describe the location or position of something or someone in space or time are known as demonstrative adjectives. They are placed right before the noun or noun phrase they are modifying. These include; this, these, that, and those,

Some might say the ordinal numbers are also demonstrative adjectives. And it is true, as they also describe the location of something in series, i.e., 1st, 2nd, 3rd,…/First, second, third, and so on. 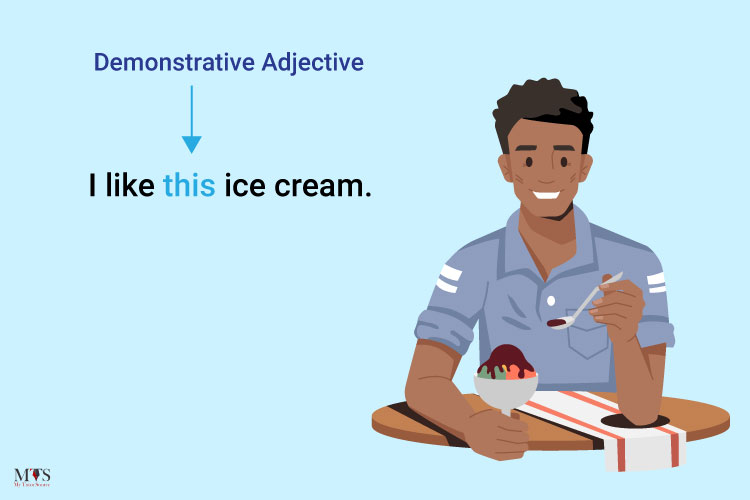 These tables are reserved for the VIPs.

This coat is my favorite piece of winter clothing.

Those couple of days were the worst time of my life.

My father is Iranian, whereas my mother is German. 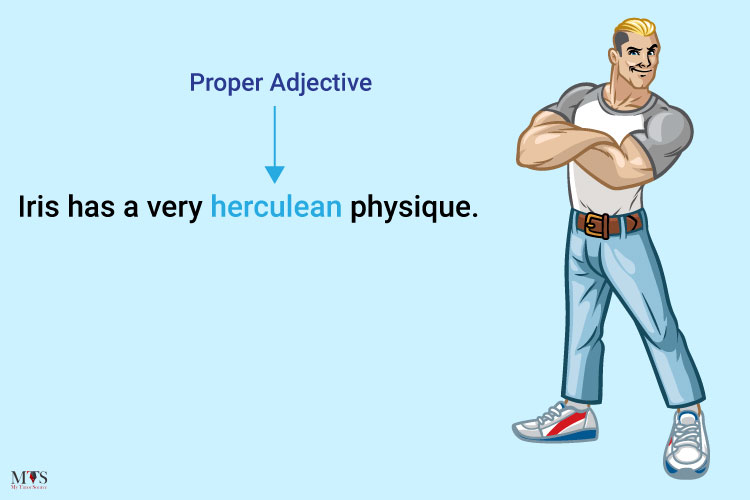 Principal adjectives are identical in form to participles. To understand them better, it’s better if you look at past and present participles. Usually, the words ending with “-ed” or “-ing” are participles.

However, when we use participles as adjectives (modifying nouns/pronouns), they are called participle adjectives.

I forgot my running shoes at home.

My sleeping pajamas are all worn out. 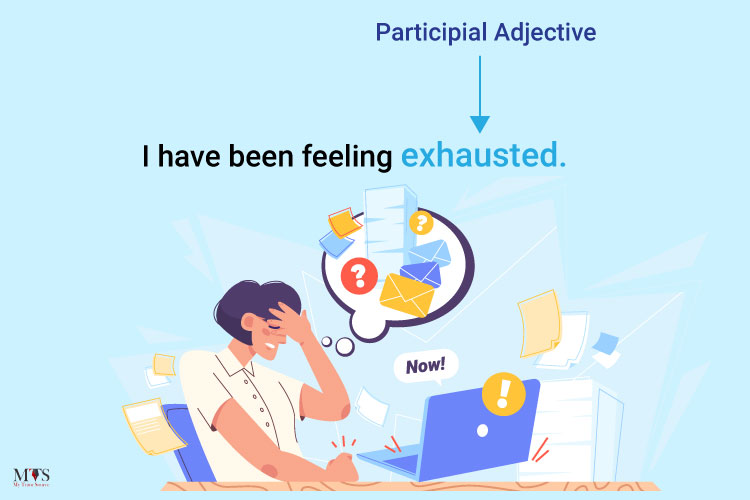 Like other adjectives, participle adjectives are placed right before the noun or pronoun it is modifying. It can also be used as a subject complement, followed by a linking verb.

I passed my driving test today.

(Here, “driving” is the participle adjective placed directly before the noun “test”).

The movie was boring.

(Here, the participle adjective “boring” is used as a subjective complement, linked with the subject by the linking verb “was.”

A few limiting adjectives include; some, few, any, several etc.

Few grammarians think that the following adjectives also fall under the criteria of limiting adjectives, as they do not describe anything specific of the noun/pronoun; demonstrative (this, that, these, those), interrogative (whose, which, what), quantifying (many, some, few, couple, cardinal/ordinal numbers), and possessive adjectives (mine, yours, their, his), as well as articles (a, the, an).

Her show starts in a couple of hours.

My best friend has some extra passes, but they are a few in number.

She went missing for several hours, and we all got so worried for her. 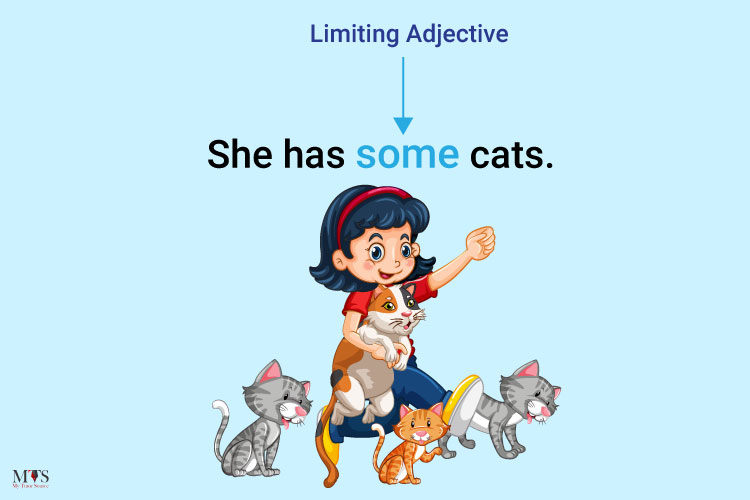 Adjectives that modify a noun or pronoun by defining its quality are described as descriptive adjectives. 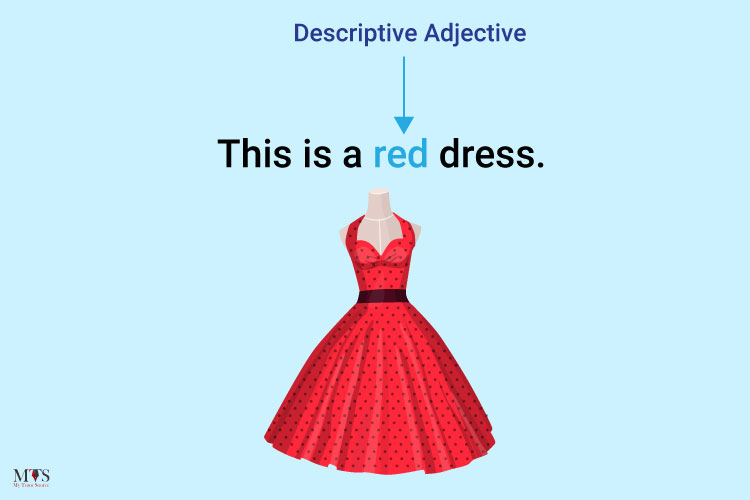 My mother is a very elegant lady.

They are placed before the noun or pronoun they modify or as a subject complement after the noun.

However, you might be wondering, “isn’t that what all adjectives do? Describe the quality of a noun/pronoun?”. But we know that is not true, as we discussed above in limiting adjectives.

The adjectives that modify a noun or pronoun by asking a question about it are interrogative adjectives. These are usually used to ask questions about a noun/pronoun in a sentence.

The commonly used adjectives include: what, whose, which. 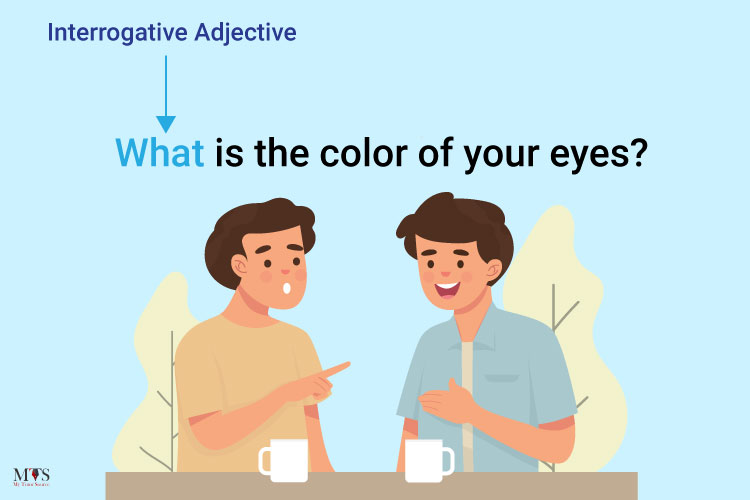 I need to figure out whose bag it is.

Although whose is a possessive pronoun, it can also be used interchangeably as an interrogative adjective.

An adjective placed right next to the noun or pronoun it is modifying is an attributive adjective. These adjectives don’t let any linking object get in between them.

They can be placed right before or after the noun, i.e., postpositively, but they are never apart, unlike the predicate adjectives.

Mary bought something special for her best friend. 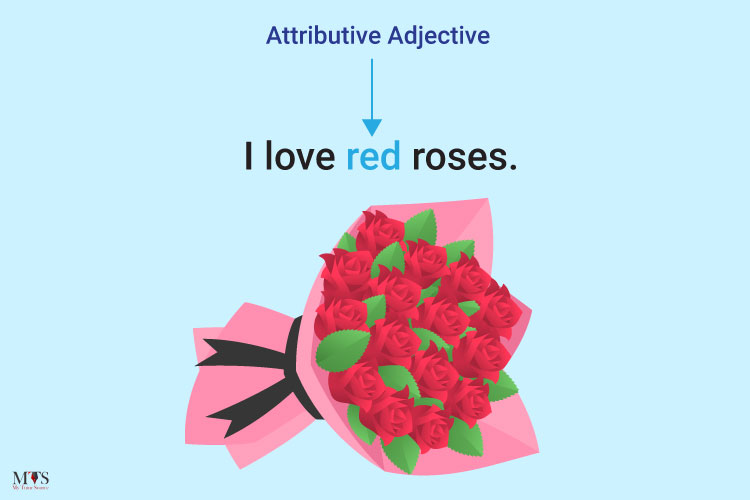 The adjectives used to refer to individual members of a group are called distributive adjectives.

They include words like: each, every, any, either/neither, both.

They are placed before the nouns or pronouns they are modifying. Usually, they can be placed at the beginning of the sentence. 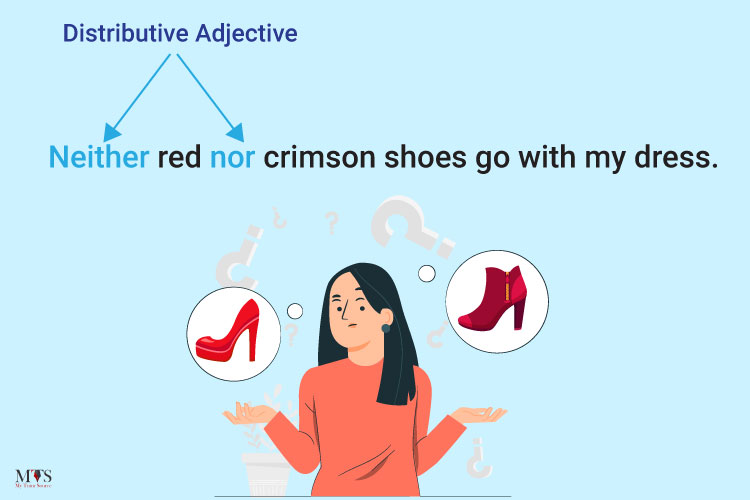 The trophies were given to each participant in the delegation.

I gave presents to every child in the room.

Difference between Adjective and Determiner:

Although a few grammarians believe that determiners are also adjectives, they both modify the noun or pronouns they are used about. However, there is a distinction between them.

Let’s compare the difference between these two:

Difference between Adjective and Adverb:

Adjectives and adverbs both modify parts of speech; therefore, people often get confused between the two. However, the difference between them is very clear.

Let’s look at the table below to learn more about the differences between adjectives and adverbs.

Let’s end with a few words on the importance of adjectives. Adjectives can make or break the quality of your writing. Therefore, it’s not only important to know the usage and correct placement of adjectives, but we also need to know when using or skipping them is ideal for your text.

For instance, when I say “I bought a pink dress,” “pink” is important because it conveys an important piece of information.

However, if I say “It’s a very big house,” the choice of adjective is poor because it is better conveyed with an appropriate noun, e.g., “It’s a Mansion.”

Therefore, when writing, we need to make an effort to choose our adjectives properly, or our text might come off as amateur or cluttered.

Don’t fret though, if you want to learn proper English writing, speaking, and listening skills, MTS has got you covered with our excellent English Tutors. They can help you improve your grammar, punctuation, and pronunciation skills.

Why You Should Solve Previous Years’ Papers Before Exams?

The Roles And Responsibilities Of A Tutor

5 Most Important Things to Do Before Going to University