Learning the Arabic Number 1-10 and Higher 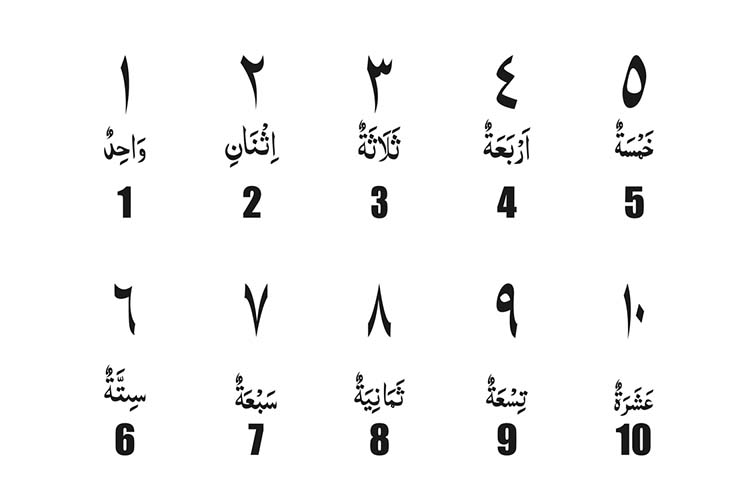 If you are a student looking to learn Arabic Number 1-10, say no more. We have got this, and we will help you not only understand the basics of the Arabic numeral system but also help you memorize the not so difficult counting in Arabic. Some might argue that there are so many types of Arabic in the world, how is one supposed to keep up?

Yes, there are admittedly quite a number of different standard types of Arabic that can be found in different parts of the world where it is spoken as a first language. But, lucky for you, you do not need to learn every form of Arabic in order to be able to count up to nine in Arabic or even further. The Modern Standard Arabic (MSA) is the standardized version of Arabic that most people are required to learn and use. And it makes sense to learn only one form of it since it is the official national language of more than 20 countries across the world. Not just that, the Modern Standard Arabic (MSA) is also among the 6 official languages used in the United Nations.

So, if you want to learn numbers and how to count them in Arabic, the words are going to be the same, standard, official, regardless of the form of the language. A fair warning, however, that if you want to move on to the bigger numbers, you will see some differences which might not be as easy to learn. Let’s not waste our time any further and dive into the world of Arabic numbers:

Let’s start from the foundation of every numeral system AKA the counting from one to ten. Once you know how to count the first ten numbers in any language, you can learn to count further fairly easily and quickly.

Note: In the number five, the letter h has a guttural pronunciation. It is like letting out a strong breath from the back of the throat as you pronounce it.

If you have trouble pronouncing the words, we have added a table below in the article to help you with the pronunciation.

Once you’ve nailed down the first five Arabic numbers, it is time to tackle the next 5. Practice them until you memorize them, for example, 6 in Arabic or 8 in Arabic, and then compile all 10 together:

Here is a table with all the numbers from one to ten with their numerals, Arabic spellings, romanized forms, and pronunciations:

Zero is called Sifr (صفر) in Arabic and pronounced as “Say-fur”. The concept of zero started in the land of India and Arab and was brought to the world of Europe during the Crusades.

Just like the English language, “zero” is not usually used in reading numbers until and unless you read cardinal numbers for example a debit card number or a phone number.

The Western numerals are commonly considered “Arabic” numerals but the numerals used in Arabic are actually known as Hindu-Arabic numerals, because of their origination from India.

The Hindu-Arabic numbers consist of 10 digits that represent the numbers zero, and one to nine:

Just like the English language, these 10 numbers are combined to make other numbers. For instance, in English, 10 would be a combination of the numbers 1 and 0. The same is applicable to the number ten in Arabic: ١٠

Keep in mind that you write and read Arabic right to left. However, you write and read the numerals from left to right, just the way you read in English. A fun fact is that in countries like Syria, Palestine, Iraq, Jordan, and Lebanon, the Arabic numerals are often used in combination with Western numbers.

It is time to move on to the higher numbers:

To make the “tens” of the numbers from 1 to 10, you have to add the “un” suffix to the base digit. All the words for the even tens are made by substituting the last syllable of the first digit with the “un” (suffix). So, let’s see the tens of the Arabic language:

Note: For the twenty, for example, take the Arabic word for two, which is Itnan, remove its last syllable, and substitute it with the un. The consonants that are present at the end of the first syllable do change, however, when writing the word with the Western alphabet.

Conjugate the number with a form of the Arabic word for 10 for the numbers 11 to 19. Start with the Arabic for the second digit and add the word Ashar (10).

It translates to “three and ten.” Follow the same procedure for all other numbers from 11 to 19.

It translates to “three and fifty.”

What About the Hundreds?

Use the same procedure to make the Arabic words for numbers 21 – 99 to create the words for the hundreds.

How to Practice Arabic Numbers?

Here are some ways with which you can practice your numbers:

And that is it! That is how you can learn how to count the numbers 1 through 10 in Arabic and then use those numbers to learn higher numbers in the tens and hundreds. It is simple and easy, just like that. If you struggle with memorizing the numbers, just use the tips above to keep your memory fresh!